I am Tanuja Ramchal, the founder of The Conscious Life Project. I am a transformational coach & trainer and a change consultant, who knows that it is possible to have a life of purpose, aligned with one’s values, strengths, and passions. I believe that lasting change comes when individuals get in touch with their deepest desires, embrace their fears, and are supported in their vision.

I hold an MBA and spent the greater part of a decade in various roles in the corporate world, including IT Management, Organizational Change Management, and Training and Development. The most fulfilling part of those jobs was working directly with people, and I felt a strong pull to do this in a more personal and impactful way.

Determined to find my true calling, I took a year off to travel, volunteer, and immerse myself in personal growth programs as a means of discovery. By the end of that year, I had gained enormous clarity on my purpose and the life that I wanted. During that period, I had also setup a library in a village in Guyana , found my tribe, and enrolled in the holistic based Coaching for Transformation from Leadership That Works.

I am most fulfilled when I am empowering others to break free of their fears and live the life of their dreams.

A few years ago my life was in major upheaval, and I questioned EVERYTHING! I was not passionate about my job, I lacked purpose, my mind was constantly racing, and my health was rapidly deteriorating. I felt stuck and did not know what to do. Every day was a major anxiety attack, as I dragged myself into work, begging the Universe for answers.

Afraid? Yes! Confused? Definitely! Guilty? FOR SURE! How could this possibly happen to me? I held an advanced degree and a corporate job and was enjoying nice vacations, happy hours and sumptuous meals. Isn’t this the definition of success? Yet, I was miserable.

What was I missing?

I tried my best to put on a brave face and hid my pain until it became unbearable. I shared what I was going through with a few close friends and each provided a different opinion. Whose advice should I take? What felt right today seemed impossible the next day. Self-doubt and desperation were my closest companions. I was in quicksand and going under fast.

Enter the fork in the road:  what was I going to do with my life?

I could choose the safe, secure life I was accustomed to and remain asleep on an unfulfilled and unhappy path. The Dalai Lama puts it best when he said we sacrifice our health for external gains. Then, we sacrifice money to recuperate our health. In the end, we are so anxious about the future that we do not enjoy the present, and we die never really having lived. That pretty much summed up my existence.

I could take a major leap into the unknown where my heart wanted to go but my mind could not yet fathom. No doubt this was risky and required calling on every ounce of courage in me. I would be challenging conventional wisdom and going against everything I was taught and had believed to be the right way to happiness and success.

I wish I could tell you that I jumped at the second option immediately. However, it took a few months of over-thinking and watching my health deteriorate before I finally resigned from my job. And even then, I had another offer with more money and a better title lined up at a similar company, which looking back was the security that allowed me to quit. I ended up declining that offer, which was another very difficult decision. And as though that wasn’t enough, I interviewed for a job in a different industry two weeks later and received an attractive offer.

Quietly, my inner voice whispered, ‘Don’t take it.’ I came up with all the reasons why that job would be different, but it just did not feel right in my heart. I called up Human Resources the next day and declined.

That was my moment of surrender!

I felt liberated. There was a major release of tension in my body and mind.

Within a few weeks, I left New York for South America, where I spent three months. I meditated, journaled, cooked, gardened, and really expressed my creativity. It was one of the happiest times compared to my previous existence.

By the end of that year, I had traveled to various places, participated in a group coaching program for individuals in transition, setup a library in a village in Guyana, found my tribe, and gained enormous clarity on the life that I wanted.

I knew deeply that I wanted to do work that would inspire people to live consciously and purposefully.

There was a recurring role in my previous jobs which included facilitating trainings and working one-on-one with individuals. Though that was not my main responsibility, it was the part which I found immensely rewarding and knew that I wanted to do it in a more personal and impactful way.

This is the exciting path that I am now on. 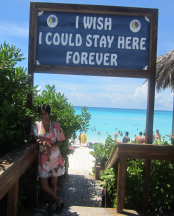 I also have the freedom to do other things which I love: traveling, cooking and eating healthy meals, taking enriching classes, interacting with like-minded individuals, taking photos of of nature, exercising, and reading inspiring materials.

Since choosing this life, I have encountered many individuals who are living consciously and following their dreams, including my clients who are transcending their fears and limiting beliefs. I am richly rewarded by watching them let go of their inhibitions and take bold steps to express themselves fully and share their gifts with the world.

It is my hope that I can encourage you along in your own journey. Let me know how I could help:

Here’s to discovering the possibilities and doing work that matters!

2 thoughts on “About Tanuja”